Sounds absurd, doesn’t it? Turning a mere $7 into a whopping $70,000?! But it happens all the time in online tournament poker. It’s actually such a common occurrence that it hardly makes headlines anymore in the poker playing community.

Meet Chris, for instance. In 2003, Chris Moneymaker (that’s his real last name, incidentally) played in an online poker satellite tournament. He paid $39 to enter — and then moved on steadily to finally win $2.5 million in the World Series Of Poker (WSOP). 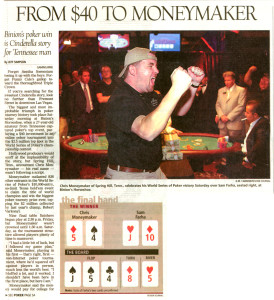 Poker satellites are small tournaments leading to big ones. Think of the structure as a pyramid. Say, there’s a big buy-in tournament you want to play in that costs $10,000 to enter. If you can’t afford the high direct entry fee, you can play in a satellite tournament to qualify. Typically, the satellite would be about $110 buy-in, with 1 in 100 players winning a place in the bigger tournament. So if 1,000 people played in this satellite, the top 10 would qualify.

Almost every major tournament has a satellite. Actually, even the tiny ones do too. For example, it’s common to see a $3 buy-in tournament offering a satellite for just 10 cents.

Step By Step In Poker Satellites

Every major online poker site also hosts smaller-scale tournaments known as Sit N Go’s. They are also typically called Steps, or other variations of that word. Steps are a great way to turn a small deposit into a big payday — something I’ve personally done many times. I also used to play regularly with an astute guy from the UK. In early 2012, he made a little over $700,000 — after a humble beginning in a $7.50 satellite. Like I said, it happens frequently. 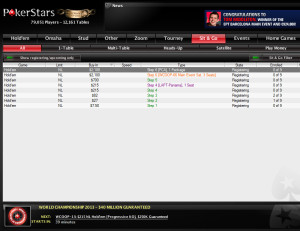 In the screenshot above (click on it to expand for a better view), we see Step games hosted on Pokerstars, one of the biggest online poker sites. The prize structure on this one works like this:

As you can see, the prize structure makes the game play rather attractive. It provides you the option of a wide variety of strategies you can use. Except for Step 6, you don’t have to be in 1st place; finishing 2nd works just as well. There’s a lot to be said about Step game strategies, so I’ll cover that separately in a future article.

Another good thing about Steps is that you can often use your Step ticket to enter other tournaments. For example, on Pokerstars, you can use a Step 4 ticket to enter any tournament with a buy-in of $215, instead of moving on to Step 5. (Most of the popular big Pokerstars tournaments cost exactly this amount.) I do this quite a bit since my win rate for Step 3 is about 1 in every 2 games. This means I usually end up paying a discounted buy-in of $164 for a $215 tournament. I’ll discuss this strategy in detail too, in a future article.

Besides Steps, there are a plethora of other poker satellites you can play that lead to diverse rewards. In late 2011, for instance, I played in a satellite that cost me $8.80 to enter. Eventually, I won a seat in a bigger ‘live’ tournament, where I had a blast — on a cruise ship sailing the high seas. While I didn’t win that tournament, it was an incredible learning experience for me (amid a delicious onboard buffet). 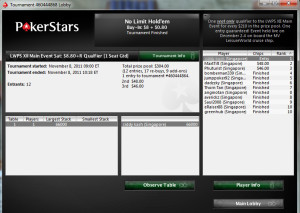 Poker satellites certainly provide lots of opportunities — especially to new players in an ‘experimental’ phase. It’s also more sensible trying out the game in an online satellite than gambling ‘live’ in a casino if you’re dreaming of a big payday. As in everything else, however, always go in with a clear plan, and set sensible limits. Good luck!