I’ll be the first to admit it: movies influence me way too much (especially casino movies). Obviously, I know that Hollywood productions are make-believe (except for The Matrix, of course). Still, my brain refuses to accept that it’s fiction — at least for a few hours after watching a gripping show. But that’s not always such a bad thing, actually.

Take, for instance, Warrior. Immediately after watching the action movie, i hit the gym 5 times that week. And when I saw 50 First Dates, I decided to pick up the ukulele. That got me laid. Twice.

But getting excessively Hollywood-ed can make you do some really dumb things occasionally. Like the day I watched Step Up 2 in a downtown cinema. I got drunk at a club just after the show, and brashly took on some b-boys. Thank God, I don’t remember how the evening ended.

If you’re anything like me, these 5 movies will more likely than not get you into trouble — if you watch them just before you hit the casino.

(Warning: Reading this article won’t ruin the movie experience for you — but there are some spoilers in it.)

A lot of professional poker players credit this movie for inspiring them to pick up the game. It’s easy to see why. Many of them were in college when this movie came out. So they could naturally relate to Matty’s character: good ol’ Mike. 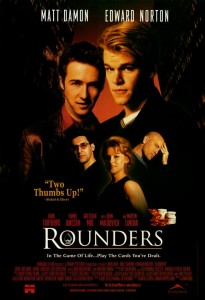 Jason ‘Balls’ Bourne will kick
your ass on and off the table.

To spice things up, this flick has a Russian mobster at the other end of the poker table. It was practically a James Bond movie. Except that they ran the find-&-replace function on a 007 script, and switched ‘guns’ and ‘bullets’ with ‘cards’ and ‘chips’. Plus, of course, how can anyone forget the thrilling climax? Flop the nuts — and one beautiful hand can change your life forever!

Happy endings are wonderful, aren’t they? Well, before you try to re-enact that final heroic scene, consider this: the odds of flopping a straight are 1.306%. So, for every 100 of you out there trying to pull this off, 98 will get killed by the Russians — and the 99th guy will be about 70% screwed.

Besides: clearly, if Matt Damon had played that hand in real life, the movie would have ended differently, methinks.

Nothing reeks of Hollywood more than a 4-handed table where everyone slow-plays it — until the hand goes to showdown. Then you find everyone shoving with the nut flush versus a full house versus a better full house versus a straight flush. And let’s not forget that the pot is over $100 million. It’s the kind of shit that gets you terribly pumped up. 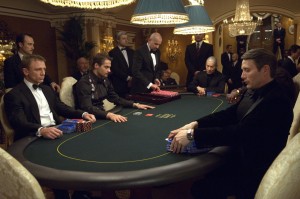 There are 3 things to note here.

First: after watching this movie, you’ll feel underdressed for the casino. So you’ll end up wearing your wedding outfit or prom suit before you leave the house. (Because, let’s face it: that’s the only tux you own.)

Second: as you walk out of the theatre, you’ll start talking weird (all men do after a 007 movie). You’ll think you’re suave and sexy. But, believe me: you’ll be labouring under a huge delusion. And keeping up that douchebaggery will get you thrown out of the casino pronto.

Third: your ‘movie high’ will wear off swiftly. You’ll realise you’re not going to save the world that day from a dastardly villain’s domination. Then you’ll get the irresistible urge to raise your stakes, just to make your humdrum life a tad more exciting. In the end, you’ll lose your entire bankroll — without even a consolation prize of a fling with a femme fatale.

I added 12 and 13 just for the heck of it. But I’m really only talking about Ocean’s 11 — which was redonkulously awesome.

Admit it, guys: we all want to be Brad Pitt. Even if you’re a 20-year-old dude right now, you’d still trade places with 50-year-old Brad. Because you know that you’d get laid more in 30 days as Brad Pitt than in 30 years as yourself. (Even though you wouldn’t need to — since you’d be married to gorgeous Angelina Jolie.) 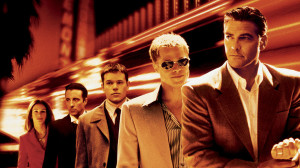 Everyone knows, of course, that if you’re Brady-boy, nobody will mind you skimming a bit off the casino’s pile. (Heck, the casino owner’s wife/mistress/daughter might even give it to you, along with her panties.) But in real life, thievery will land you in the soup and lots of pain — especially in casino-land. So snap out of it. I know these Hollywood dandies make it look oh so cool and easy. And maybe you’re even as bendy as that Asian chap in the movie. But don’t kid yourself; you’re not capable of pulling off a heist even at McDonald’s. And you sure as hell aren’t Brad Pitt.

No Action For Math Nerds

The problem with 21 is that it’s based on a true story. The MIT Blackjack team was a real-life group made up of actual math nerds. So what it does is give you hope: that being math-savvy will get you into a girl’s pants. 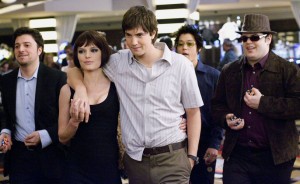 Don’t believe me? You still think you can score with that chick if you kick some ass in Blackjack? Forget it. I’ve studied the Hi-Lo method intensively, and even paid for a few card-counting tutorial/practice apps on my iPad. All I ended up learning was that casinos now use Continuous Shuffling Machines (CSMs) to counter it.

I hope your porn’s done streaming.

Ok, technically, this isn’t a gambling-themed movie. But any film shot in Sin City is going to see some casino action. The Hangover is no different. 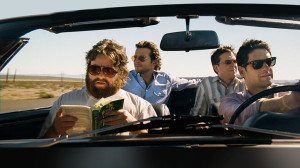 “It’s not gambling when you know you’re gonna win.” — Product placement at its finest.

When the whole world comes crashing down for a group, Alan manages to master card counting on a car ride with his pals. Then they go on to spoof Rain Man. Now, I know that no one in his right mind would think he could actually pull this off. But stick with me for just a minute in this fantastical scenario.

It’s a typical Friday night. You and your buddies are out on the town, and you all get wasted as usual. Someone then says: “We’ll totally regret this when we’re hung over tomorrow.” Another chap responds: “Hey, remember that movie ‘The Hangover’?”

This leads to discussing how you guys should go to Vegas for one of your bachelor parties, how much the trip would cost, and how you all could pull off what Alan did in the movie — to fund your entire Vegas holiday. And, in your drunken stupor, you all end up at the Blackjack table counting sheep before you know it.